I grew up in a rural Southwest Missouri town on Table Rock Lake. As a young entrepreneurial minded kid, I started a small business installing accessories on boat docks in my small town. After a storm ripped through the lake, destroying several docks, I saw an opportunity to expand the scope of the business by helping those people replace what they lost. So I leveraged my experience working on docks and I started building them. When I left home later that summer for college at Mizzou, I had six employees and I traveled back and forth between Columbia and home to grow my business.

What I didn’t know at that time was only a couple of years into this journey the economy would be crippled by the most severe recession our country had experienced since The Great Depression. It was a trying time for almost every small business in America, and mine was no exception. It was an incredibly challenging and formative experience for me as a 20-year-old kid to have to figure out how to survive in that environment. Ultimately, I succeeded, and when I graduated from Mizzou my company had 30 employees and was building docks across the Midwest. The business continued to grow to become one of the largest dock manufacturing and construction companies in the country. Currently, we employ approximately 70 people manufacturing docks and building marinas all over the United States.

But what I learned during that difficult time as a kid just trying to make a payroll and survive until the economy improved was that in many ways the biggest obstacle to my success was a bloated, inefficient, and usually very unhelpful sea of government bureaucracy. I found myself on the phone begging bureaucrats to sign a piece of paper and move it on the next agency in line to get required approvals and allow projects to proceed so I could keep my employees working. It was through this experience I realized how important public service is and how badly government, at all levels, needs people in office who have faced adversity in the private sector, and experienced, firsthand, the negative effects of too much government.

My life has been blessed in many ways, and opportunity has been one of those blessings. That opportunity, combined with God’s grace and the strong work ethic instilled by my parents and inspired by our shared Missouri values, allowed my business to not only survive the recession, but to thrive. But I never forgot The Great Recession, and I never forgot the bureaucratic roadblocks I encountered along the way. That’s why, at 24 years old, I chose to run for a seat in the Missouri House of Representatives. Once again, hard work paid off, and the voters in my district sent me to work for them in the state legislature.

When I arrived in Jefferson City, I immediately went to work fighting for taxpayers on the Budget Committee. I felt the best way to hold government and bureaucrats accountable to taxpayers was to control their funding. So I worked harder than everyone else, and learned more than everyone else about the state budget and ultimately became the youngest Chairman of the Budget committee in Missouri history.

When I became Budget Chairman I inherited a massive budget deficit, but I went to work, cut wasteful spending, and balanced the budget. I defunded Planned Parenthood, and I fully funded the state’s K-12 foundation formula for the first time in a decade – allocating a record amount of funding for the education of the next generation of Missourians. I was proud to come up with a plan that delivered a budget surplus while still being able to help pass the largest tax cut in Missouri history. I defeated a plan hatched by Democratic Governor Jay Nixon to give illegal immigrants in-state tuition at Missouri higher education institutions by cracking down on their funding. After Democrats lost that battle, they attempted to change state regulation to allow those same illegal immigrants to receive scholarships funded by Missouri taxpayers. Once again, I fought back against this attempted abuse of taxpayer money, and I won by passing a bill overriding those regulatory changes and leading the override of Governor Nixon’s veto of the legislation.

The bureaucrats and lobbyists didn’t believe it was possible to accomplish all these things at the same time. But I knew the truth – if we are willing to make difficult decisions and put the interests of Missourians above those of special interests, anything is possible. At the end of my time as Budget Chairman, even after making a record investment in K-12 education and passing a tax cut that put money back in Missourian’s pockets, our budget surplus was over $650 million.

After six years of delivering results for taxpayers in the House of Representatives, Governor Parson, citing my experience as a job creator and my proven record of fighting for taxpayers, appointed me to serve as State Treasurer. In that position, I’ve increased investment revenue, returned a record amount of unclaimed property to Missourians, and increased government transparency by creating an online database of state and local government expenditures so every taxpayer can easily see how their money is being spent. Serving my fellow Missourians has been an honor and another blessing.

Like many Missourians, my greatest blessing of all is family. My wife Mallory and I are the proud parents of three boys - six-year-old twins Luke and Carson, and one-year-old Noah.

During my time in public service, I have been a relentless fighter for taxpayers. As House Budget Chairman, I balanced the budget and helped pass the largest income tax cut in state history. I reformed and eliminated broken programs and fought against and defeated democrat led policies that promoted illegal immigration. I defunded Planned Parenthood, eliminated restrictions on our 2nd Amendment rights and gave law enforcement the tools they need to keep our communities, and themselves, safe. I was able to do all of this while passing budgets that invested record amounts in education and restored fiscal sanity to our state government by fixing a budget that was perpetually unbalanced and delivering the largest surplus for our state in decades.

After restoring Missouri's fiscal footing as Budget Chairman, I was honored to be appointed State Treasurer by Governor Mike Parson. As Treasurer, I’ve fought back against misguided Biden Administration policies like the IRS bank account monitoring scheme, woke environmentalism disguised as ESG initiatives for the investment of public funds, and the John Kerry/Joe Biden pushed boycott of American energy producers by big banks. Here in Missouri, I led the charge to force MOSERS, our state employee pension plan, to immediately divest of any investments in Russian securities following their unprovoked attack on Ukraine.

Leading the Fight Against the Biden Bank Snooping Scheme

I’ve saved Missouri taxpayers millions of dollars through reforms of various programs, and I fought back and defended a conservative organization against an attack from the largest bank in the country when JP Morgan Chase canceled payment processing services for ticket sales for an event featuring Donald Trump, Jr. I’ve returned record amounts of unclaimed property to Missouri taxpayers by creating new partnerships with the Department of Social Services and the Department of Labor to cross-reference their data against the data in the Treasurer’s office. These partnerships have resulted in families receiving millions of dollars in child support from unclaimed property, and millions of dollars more going to individuals who lost their job and applied for unemployment with the Department of Labor during the pandemic. 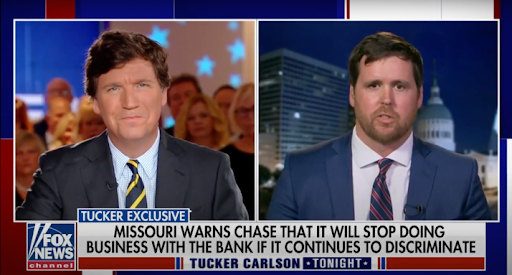 Taking on (And Beating) Woke, Cancel Culture on Tucker Carlson

There are attacks on Missourians every day and at every level of government. That is why it is imperative we elect a proven, conservative champion with a record of fighting for taxpayers and that is why I'm running to be your next State Auditor.

I'm running for State Auditor to continue fighting for taxpayers. My plan:

As Auditor, I'll expand upon the work I've done throughout my public service. Where waste, fraud, and abuse occur, I will find it and root it out. I have a record of doing that as Budget Chairman and as Treasurer. As Auditor, I will have the tools necessary to continue that work on an even greater scale, allowing me to have an even larger impact on government at the state and local level.

As House Budget Chairman, I defeated a plan hatched by Democratic Governor Jay Nixon to give illegal immigrants in-state tuition at Missouri higher education institutions by cracking down on their funding. After Democrats lost that battle, they attempted to change state regulation to allow those same illegal immigrants to receive scholarships funded by Missouri taxpayers. Once again, I fought back against this attempted abuse of taxpayer money, and I won by passing a bill overriding those regulatory changes and leading the override of Governor Nixon’s veto of the legislation. As Auditor, I will ensure your tax dollars are not spent providing benefits to illegal immigrants.

We have witnessed countless attacks on our values and out of control spending from the Biden Administration and the liberals running Congress. Missourians are fiscally conservative, and we don’t take it well when politicians and bureaucrats waste our money on inefficient programs or by giving handouts to insiders. As Treasurer, when the Low Income Housing Tax Credit Program (the state’s largest tax credit program), was wasting millions of dollars per year to benefit wealthy developers, I championed reforms to the program that are saving tens of millions of dollars per year for taxpayers. As Auditor, you can trust me to give you the facts, fight for reforms wherever they are needed, and not cave to pressure from lobbyists or special interest groups when those facts show they are benefiting from sweetheart deals at your expense.

Our kids are the future of our state and are our most precious resource. I am a product of public education, and I am proud to be the son of a lifelong schoolteacher. Many of our schools do a great job educating our children and preparing them for their next phase of life, but unfortunately, not all Missouri schools are delivering acceptable results. In 2008 the legislature passed a law to allow the Auditor to audit school districts. In the 14 years since that law took effect, only 19 audits have been conducted pursuant to that authority, despite there being 516 school districts in Missouri! Meanwhile two thirds of Missouri students aren’t proficient in math or science, and over half don’t read at grade level, despite record levels of funding for public schools. As Auditor, I’ll review administrative costs and administrator salaries and measure the performance of our schools against the investment taxpayers are making in them. I’ll ensure schools are following the law and keeping politically divisive curriculum like Critical Race Theory, and discussions relating to gender or sexual preferences out of the classroom. I will help parents make sure their schools are doing what they're expected to do: teach kids the things they need to learn to be prepared to join the workforce or go to college.

As Treasurer, I am proud to have created the local government checkbook so Missourians can see exactly how their county governments are spending their hard-earned money. As Auditor, I will continue this focus on government transparency. Waste, fraud, and corruption will not be tolerated at any level of government. We have seen lawless behavior from some of our local governments, including the St. Louis Circuit Attorney. While attacking law enforcement, Kim Gardner's office continues to fail to perform their duties, leading to charges (even in murder cases) being dropped due to failure of the Circuit Attorney’s office to even show up for court!

Murderers cannot be set free because of prosecutorial incompetence. As Auditor, I will lead a comprehensive audit of any local government that is failing to protect the taxpayers it is elected to serve.